This was my fifth trip to Kraków and I saw two things I had never seen before.

The first was the Festiwal Kultury Żydowskiej w Krakowie - the annual Kraków Festival of Jewish Culture, which was in its 16th year. The old Jewish area of Kazimierz was full of music and cultural events, the highlight of which was a huge street party and concert on Saturday night. It was fantastic, but I am not going to write about it. If you are interested, see http://www.jewishfestival.pl/.

The second thing: on Saturday afternoon, A said she wanted to take me out of Kraków and show me something special. We drove to Przegorzały to visit the zamek (villa) there, which is on a hill overlooking the Wisła river and has an amazing view of the countryside between Kraków and . It was absolutely gorgeous and we sat on the terrace there and had coffee.

There’s more. Like most places in , the zamek has a history. Hans Frank, Governor-General of Occupied Poland from 1939 to 1945, used the zamek as a summer residence. The story A told me is that Frank did one or two things to the zamek in order to impress Heinrich Himmler, although it is not known whether or not Himmler ever made it to the zamek. The thing Frank did, which is still in evidence in the foyer of the zamek, is that he ordered the construction of a granite fountain in an interesting shape.

Because a picture is worth 1000 words, here is a photograph that I took, standing on the edge of the fountain to get the full effect from above: 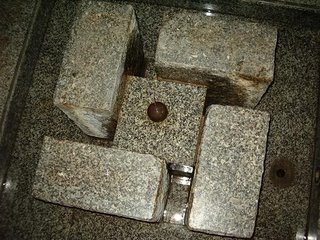