No Case for War – unless you consider global empire, that is 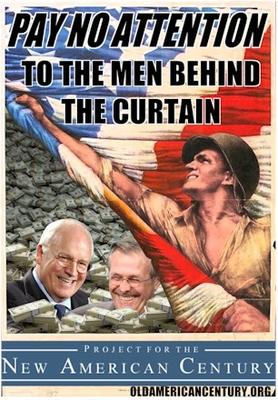 On 28 December 2005, the Chicago Tribune published an article called “Judging the case for war”. The article summarises nine arguments that had been presented by the Bush administration in their case for war, and compares what was “known” then to what is “known” now. The Tribune concludes that invading had indeed been the right thing for the to do. I am going to conclude differently.

The Bush administration is guilty of telling total outright lies.

i.e. Saddam Hussein scoffed at UN resolutions and did not do as he was told. I say, So what? There are a lot of things I could say about the UN and probable corruption on that side, but let it suffice here to say that the UN had imposed sanctions on so had already been punished for its rebelliousness. But more to the point, if a sovereign nation does what it wants to do rather than what it is told to do, that is not a reason for other nations to invade its territory.

3. The quest for nuclear weapons

The Tribune admits that, “Claims that sought uranium and special tubes for processing nuclear material appear discredited,” yet the newspaper still concludes that real intelligence about possibly developing nuclear weapons was “menacing enough.” I question that. If the technology and materials for nuclear weapons are so within reach of a country like , why don’t more countries have them? There is something extremely suspect about these intelligence claims.

On the 29th of December, when discussing the Tribune article on Fox News, General Wesley Clark claimed that the nuclear threat was “hyped” by Bush and Condoleezza Rice, and he then further stated outright that the “nuclear argument was false.”

The White House claimed that the longer we left Saddam Hussein alone, the more time he would have to share weapons with terrorists and to develop more and scarier weapons.

The Tribune states that, “the implications of this warning about ’s intentions are treacherous to imagine.” I say “imagine” is an interesting word to use there. If “terrorists” refers to Al-Qaeda, we already know that there were no significant ties. I would also point out that big scary weapons are already in existence all over the place and “terrorists” would not have to wait specifically for to share them. This was a bullshit argument.

We already know there was no substance to the claim that invading was necessary to the “war on terror”. The Bush administration’s claims of “harbouring” or aiding terrorists were at best exaggerated, but more probably made up.

6. Reform in the Middle East

The Tribune claims that invading has “provoked political tremors in a region long ruled by despots,” and that diplomacy “has advanced democracy and assisted freedom movements in the sclerotic .”

If for the sake of argument we accept these claims, I then ask, At what cost?

However, I still assert that democracy, by definition, cannot be imposed.

Another argument that everyone already knows was complete horseshit. General Wesley Clark confirmed on Fox News that there was no “causative link” between Al-Qaeda and , “only low level intelligence contacts, which most governments in the have.”

Indeed horrific stuff, and no one questions it. But why ? There are atrocities going on all over the world. The Bush administration used this argument because it is the most compelling one, but I do not believe for a second that the Bush administration actually cares about the lives of those who were murdered or tortured by Saddam’s regime.

Senator Joseph Lieberman (D-Conn.): “Every time the 27 million Iraqis have been given the chance since Saddam Hussein was overthrown, they have voted for self-government and hope over the violence and hatred the 10,000 terrorists offer them.”

…And while Kurds, Sunnis and Shiites have major differences to reconcile, a year's worth of predictions that Sunni disaffection could doom self-rule have, so far, proven wrong.

I personally do not think that the picture is really that rosy, but never mind. The question that again has to be asked is, At what cost? And then there is the question of whether it is fair to call an occupation ‘liberation’.

After reassessing the administration’s nine arguments for war, we do not see the conspiracy to mislead that many critics allege. Example: The accusation that Bush lied about Saddam Hussein’s weapons programs overlooks years of global intelligence warnings that, by February 2003, had convinced even French President Jacques Chirac of “the probable possession of weapons of mass destruction by an uncontrollable country, .” We also know that, as early as 1997, intel agencies began repeatedly warning the White House that , with fissile material from a foreign source, could have a crude nuclear bomb within a year.

Seventeen days before the war, this page reluctantly urged the president to launch it. We said that every earnest tool of diplomacy with had failed to improve the world's security, stop the butchery--or rationalize years of UN inaction. We contended that Saddam Hussein, not George W. Bush, had demanded this conflict.

Many people of patriotism and integrity disagreed with us and still do. But the totality of what we know now--what this matrix chronicles-- affirms for us our verdict of March 2, 2003.

We all know by now that most of the pre-war intelligence sucked and that Bush and his Neo-Con cronies made shit up. We also know that they never gave a rat’s arse what Jacques Chirac thought. The reasons to go to war that were presented to the American people and the world were just smoke and mirrors anyway, all in the interests of keeping us from figuring out the truth.

The real reason we invaded was to build up our global empire. It really is as simple as that. If you don’t believe me, please read about the Project for the New American Century at http://www.informationclearinghouse.info/article1665.htm.

The Project for the New American Century is a non-profit educational organization dedicated to a few fundamental propositions: that American leadership is good both for and for the world; and that such leadership requires military strength, diplomatic energy and commitment to moral principle.

"If 'terrorists' refers to Al-Qaeda, we already know that there were no significant ties."

One out of three ain't bad?