On the night tram 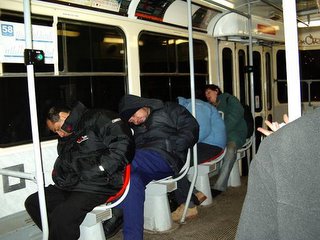 Last Friday night/Saturday morning, Monkey and I boarded a night tram only 4 stops away from our house. This is what it looked like.

The 2 people right behind us were the only ones not asleep. One of them had stripey hair. 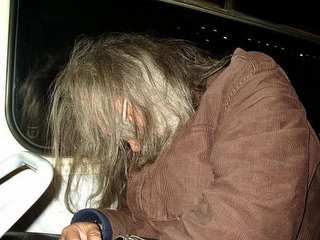 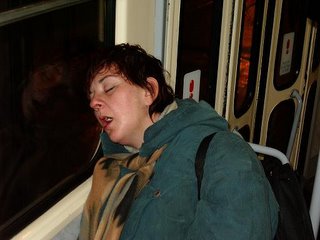 Monkey took photographs somewhere between the stop where we had got on and 2 stops from our house. The man with the stripey hair thought that Monkey was very funny for taking photographs. 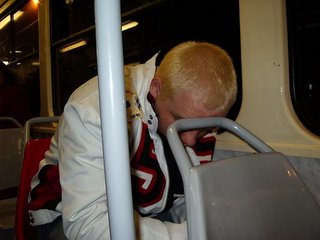 2 stops from our house: Monkey yelled “konečná”, which means “last”. Some of the sleeping people jumped and looked around, obviously disorientated. But they all went back to sleep.

1 stop from our house: Monkey again yelled “konečná” and this time the stripey haired man added “konečná zastávka” – last stop. Same reaction from the sleeping passengers as the first time, but more so. The two of them (Monkey and stripey hair) found themselves hilarious.

Stripey hair walked to the front of the tram and knocked on the driver’s door. He had a little chat with the driver.

At our stop: Monkey shouted “konečná”, stripey hair again piped in, and then the driver with the sense of humour played the tram’s authoritative sounding recorded message: “Konečná zastávka, prosíme, vystupte” – last stop, please get off. All of the sleepy people awoke this time, and some of them jumped to their feet.

Monkey and I got off and went home. I don’t know how many people were supposed to get off at our stop, or how many did but shouldn’t have, or anything like that. At first I thought that it was really mean to play that joke on those people, but then I thought that perhaps Monkey, stripey hair and the driver did them a favour because they had all already gone past their intended stops anyway.

Is that any thing like Night Train? We used to drink alot of that in college.

You did a very kind thing!

The story was great the first time, but with the photos, it truly adds something special. I got sick of looking like those poor buggers...now I just wait for the day trams to start. Heh.

This is the funniest thing I have ever read or seen on your blog.
I regret not taking my own night tramp photos before moving. then again I had IVan and his red BMW. Say hi to him for me if you see him at JAma.