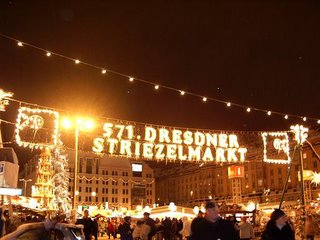 Weather wise, we probably could have picked a better day to make the trip to to go to the Christmas market. …or what should have been a trip of and just a couple of hours in ideal conditions.

Sunshine, Suz and I got started a little bit after 10 yesterday morning. It was not snowing at all in , but the border between Czechia and is all mountains and it was snowing up there. We drove through and were heading for the Cínovec/Altenberg crossing when we were diverted because of the snow. The cop told us we could go west and try the crossing at Moldava. When we got to the top of the mountain there, we drove right into a white-out and had to turn round and go back. The car got stuck and Suz and I had to push. While I was having visions of us losing our footing and the car rolling back over us, two lads suddenly appeared to help. We drove back down the snowy curvy mountain road and discussed our options. We figured the sensible thing would be to leave the mountains behind and stay inside the so of course we headed further west and back into the mountains to the next border crossing. Another near white-out and Sunshine being determined and fearless and loving his new very effective winter tires, and navigating by the poles marking the road…and finally we got to the crossing at Mníšek and made it into Deutschland. Things were even worse on that side but we did make it to by about 3 p.m.

We parked the car and walked towards the Altmarkt where the main Christmas market takes place. The Dresdner Striezelmarkt was established in the year 1434 and is the oldest Christmas market in . Sunshine and I wanted to drink our way round it. We started with glühwein mit amaretto. The warmth and the alcohol were just what we needed. It was still snowing.

We walked further into the Altstadt, threw snowballs and looked at the Frauenkirche in the snow – absolutely breathtaking. Sunshine and I were thirsty again. We went to get some beer and lunch and it was wonderful to be inside and to eat something hot. Sunshine and I chose sauerbraten with cabbage and dumplings; Suz is a vegetarian so had to take what she could get.

We returned to the market fortified and Sunshine and I got back to drinking. We had blueberry glühwein, which was a bit strange, and then Hausgemachter Eierpunsch (homemade eggnog, TM – it was really good), and then things got weird. Sunshine went to the next drinks stall and came back with Feuerzangenbowle – I have got no idea what it was, but it was warm and I drank the cup that was given to me. Before I had even finished that, we spotted the seller that had received the market’s best glühwein award and so Sunshine pushed another cup into my hand. Suz, by the way, was being uncharacteristically sensible and not drinking much at all. She just kept buying more and more things to wear (e.g. socks, gloves) as she was trying to stay warm.

We made a second foray into the culture centre to use the toilets. We walked upstairs but the door to the first floor, where the toilets were, was locked. We walked back down to the ground floor and Sunshine decided we should try the lift. I thought there was no way they could be that stupid, to lock the door but not the lift, but I was wrong. We got off on the 1st floor. I went straight for the disabled toilet. When I came out, I got a talking to but spoke no German so the man would leave me alone. Suz was waiting back in the lift and filled me in. The doors to the other toilets had been locked and she and Sunshine had been apprehended. Suz had been trying to hide so she could use the disabled toilet after me, but that hadn’t worked. Sunshine had then gone to use the toilets by the restaurant on the 2nd floor. We went up there, Sunshine was just coming out of the men’s, and the queue for the women’s was just stupid. Sunshine took Suz into the men’s toilets; several other women followed.

We went back out to the market, and I think our next drink was Jagertee – again, no idea what it was, but it was warm and felt lovely in my veins. Eventually Sunshine said that it was time to go and see if the roads had got any better. We were worried about not being able to get to the border on that side. We would have happily stayed the night in , except that Sunshine had to work today. But the roads were fine, there was no traffic and we were able to cross at Altenberg/Cínovec and get back to in about 2 hours. 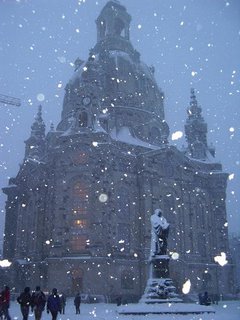 Ahhhh the Dresden Christmas market...I am glad to hear that you had a suitable adventure! Although, I have to admit that you in snow always made me laugh and I can picture your dainty footsteps in your coat called Emily....hahaha

By the way, I had a glass of eggnog on the weekend at a party and I am not sure if I should make that at home from scratch...maybe I didn't add enough rum - it just seemed thick and gag worthy...

TM, I am sorry that I don't know who it is that is insulting you, but I want it to be on the record that it is not my brother. The real Asshole has promised that he will always use his log-in (which as you know would make his name blue) and he was not on this blog at the time of that comment.

TM, if you would like me to remove the offending comment, I will be happy to do so.

Imposter Asshole, either write in your own name, or just fuck off.

By the way, TM, I enjoyed your comment. I am touched that you remember Emily's name; she came from Dresden as well - I bought her at Karstadt after my leather jacket was stolen from Bistro Tina when Jeroen had borrowed it for his motorcycle lessons.

Maybe we should look for a German recipe for eggnog because that Eierpunsch was fantastic.

I still take dainty steps on the snow.

I am looking for a German recipe now - I leave for Dublin on the 29th so I have a few days to experiment...watch out for the photos!!!

As for the Anonymous poster (and impostor) and her/his/its rant has proved that you don't need a name to be a run-of-the-mill, boring cunt ......you can delete the rant if you wish but I feel sorry the person in question - anyone that bitter and insulting takes themselves far too seriously … and in my experience that usually means short-man-small-cock syndrome! HA-HA

Bistro Tina??!!! That is a place I haven't thought of in years...soya pieces, cabbage, rice and 18 pints of beer!

We should have a reunion there!! or the other place across the river - with the garden and the great food...

So while I am attempting to rise to the "make your own eggnog" photo challenge - what are you going to do?

What the hell? I'm fucking infamous. I love it!

Ego, party of one.

Two types of people in this world Monkey:

Monkey, behave. And see the new post. kd is going to be so angry if she sees it. But I suppose she is so busy at the circus that she won't have time to look at my blog.

TM, I will get back to you on the Eierpunsch challenge. The place across the river was U Lipy.

Two types of people in this world Monkey: Aggressive and Passive-Aggressive.

Wow, you conservatives sure like a black and white world!

Do you think my world will ever be so simple, Uncle Asshole?? Do ya??! Ha??

You forgot one Monkey:

Take your depression elsewhere my friend, I'm not much interested.

You can say that again.

I took the photographs myself, by the way. These are the first of my own I have ever posted. I think my Frauenkirche is positively inspired.

The photos are great! Good for you! - perhaps I have some stiff competition for best picture of Eggnog vs. Eierpunsch....